I bought Mass Effect 1+2 when they were on sale because some people had told me repeatedly that I simply had to play it. 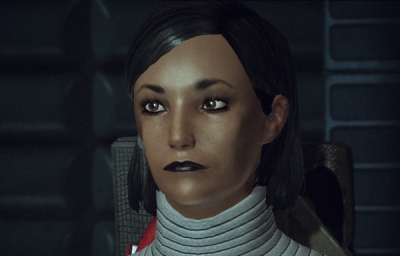 First of all, the Steam version of ME1 sucks. Badly. It doesn’t launch from Steam at all, then via finding the .exe, giving it Administrator privileges and compatibility mode kind of works.
Then I was greeted by the most atrocious “select menu item” sound I’ve ever heard. Seriously, this made me reconsider even creating a character for a minute.
Character creation was ok, but I didn’t notice in there that my character’s nose is totally awkward. 4h in this is still annoying me, but I sure as hell won’t restart now.
The controls might be ok, but not for me. R is autorun in all my MMOs, so I keep on flinging grenades left and right. Mousewheel should zoom in and not draw weapons. Gladly nobody minds getting a Sniper Rifle in their face on any planet.
I hate the combat system. I’m playing on the lowest difficulty setting (“Casual”, haha) and I keep on dying left and right. It feels like playing Quake with my hands tied behind my back. QuickSave (F6) is my new best friend.
But the story and real RPG elements are nice. I like the dialogue system and the voice actors. Not sure yet about all the NPCs. Sometimes a line gets repeated too often, but that’s ok.
That was the “first 5h review”, played in 3 chunks of ~1.5h each.
8 hours in, I’ve managed to finish the two combat encounters I ranted about above successfully. Level 15 now, cleared some pirate outpost, got better weapons. Still not sure what the pause function via spacebar is good for, maybe I should use more biotics? But it’s a lot more fun right now
12 hours in, I’ve spent a lot of time on the Citadel, did a lot of quests and less shooting and I’m enjoying it. Now off to Feros and/or Noveria and continue with the story, although the Geth are the least fun part of the game as of now…
15 hours in, I’ve completed Feros (for the main storyline) and generally been destroying everything in combat now. Some things still feel a bit clunky, and as I’m maxed on Sniper Rifles, packs of enemies in melee range aren’t so easy, but overall it works. My combat team is Wrex and Ashley or Kaidan. I’ve also advanced with the romancing… I guess. Still very happy with this game, although now it already told me to hurry up and advance the main plot instead of doing every other quest.
And I finished after 21 hours with Level 42. Too bad I couldn’t continue with my unfinished random assignments after the main plot ended. 🙁
I had been doing mostly side quests until after Feros, then I started pushing through to the end.
In the end I managed to get 16/45 achievements, although the wiki tells me there should be 49, not 45. The romance stuff was ok, but I liked the SWTOR one better.
In summary: Nearly a perfect role-playing game besides the first few fights. Awesome story, some of the crew members are a bit meh and I expected to have more dialog options with them, but overall… pretty cool.