Currently back in the “play grindy games and listen to podcasts” mood, so not only have I played a lot of Guild Wars 2, no, also did more than log in for Login bonuses in Marvel Heroes! 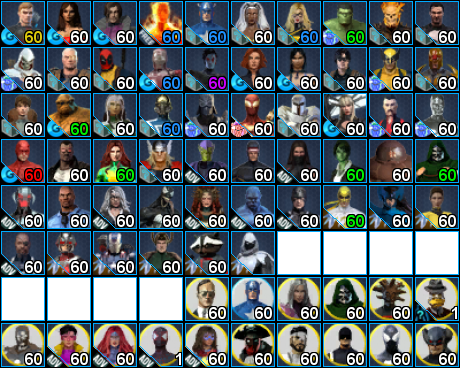 So, what changed? There’s 5 new 60s I guess. Nick Fury was in the Advance Pack and I levelled him a while ago already (probably in April). This week I spent most of my >2000 Eternity Splinters and bought 5 heroes for 400 each. Ant-Man, Warmachine, Loki, Rocket Raccoon and Moon Knight. All besides Moon Knight were already rushed through parts of story mode and are Level 60 with an absolute minimum of gear. Meh, completionism only for now. Still sitting on a massive amount of G from a ridiculous sale a while ago, will probably be spent on Team-Ups. I also worked on a few achievements, but not really worth mentioning I guess.
To my big disappointment the Fantastic Four were taken out of the game, so unless you got/bought them before, you can’t get them. This sucks quite a bit, as I only have two of them, and could’ve easily grabbed Invisible Woman and Mister Fantastic if I had heard about the change in time 🙁