Some time ago I decided I want to try healing in SWTOR, but I had no suitable character. As I’m playing mostly Empire right now, that CL 300 Smuggler with ~240 DPS gear wasn’t any help, so I started to play my Operative a bit more, with the intention to grab some healing gear from the higher tier Command chests. He’s CL 134 now, so that’s not so much, but ok, it’s progressing.
But I also still had one of those boosts left so I went out to create a new char with the intention to boost. Then I read up on the boost and I felt this wasn’t worth it. You skip all the story, you can’t make your decisions, meh. How long can it take to level up? Wasn’t there some Double XP event planned after Christmas?


That’s how my Mercenary got started. I wanted to replay the Bounty Hunter story line anyway (thus the boost would have sucked) and I very quickly went to Level 20 (big surprise). Then I couldn’t play for a few days due to Christmas stuff, but with the +25% XP boosts from quests and the +100% server XP buff I managed to get to 70 in less than 10h, and I’m sitting at CL 26 already, having finished everything up to and including Yavin 4, as I usually do on all my chars. I just skipped Ilum again this time. And I already could transfer one 240 item from my Commando (at CL 236 now) over, via slotting the modules into a bind-to-legacy item. It’s not so cheap, but I’m not exactly lacking funds right now. 240 is a lot better than the 210 item he had equipped. So I guess this route is a lot quicker now. I respecced the Commando to Healing as well to get healing gear from the boxes, then I will transfer that over. Maybe I should’ve done this legacy-ification a lot sooner, but I felt it wasn’t really worth pre-248. This is now just an exception because I want to have some healing equip. Of course I was still too chicken to try to heal a random FP, but I hope I’ll feel confident enough soon 😛 I do think it has more to do with “running a dungeon” than “the pressure of healing” – I just don’t like small group content.
I’m pretty happy how he looks, I wrote before that I tried Male Body Type 4 once and hated it. This one now is fine – I just need to watch out which chest item I show, because in some of them he really looks to fat and unfit for combat.

I usually insert too many screenshots, because I make too few – but here’s one of one of my favorite semi-reproducible bugs: If you change your spec while being mounted you will sometimes be shown running while mounted. Depending on the type of your mount this looks wrong or really funny: 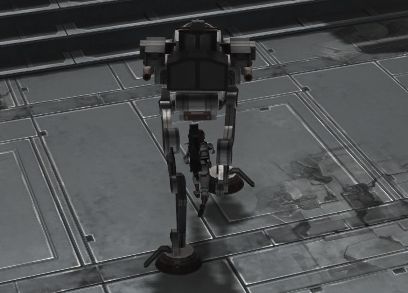