At ~273 hours /played on Hawkeye (yes, that includes a lot of idling as I’m still working on the “500 hours on one character” achievement) it’s finally done – my first (and probably last) Cosmic Prestige Level 60 Hero. I threw all the XP pots I had on top of the +100% server XP and -50% needed for Cosmic Prestige, I think I saw 640% XP on my charsheet at one point.
Gaz is also pretty generous with Team-Ups this Christmas, so this is how it looks now: 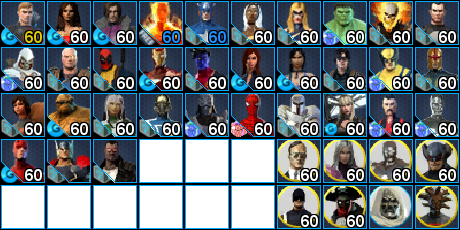 Gambled for another random hero today as well – no luck. And my free costume box was a “Wolverine X-Men Uniform” one, not sure I’ll use it. After the big finale I started a round of clearing up the STASH by exchanging 4 uniques for lots and lots of relics, this time I was a lot luckier and finally got around 200 Atlantis ones. Captain America, Nova and Squirrel Girl are capped at 1000 Relics, but they don’t use Atlantis ones.
So now I’ll focus on either Thor or Blade, and I still have 463 Splinters and 480 G to spend.
All in all I spent a lot more time in GW2 the last few days, but getting this huge thing out of the way will probably fuel my fun in this game again. Cosmic Prestige is just too much.

Nope, it’s still not done. But thanks to various events (including a 4 day Midtown Madness) and 2 days of vacation I managed to push Hawkeye to 55 – sitting at 11d, 1h, 20min /played for him.
I randomed Blade (very nice) and still have 494 Eternity Splinters left. Omega Points at 2508 – so nearly exactly a third of the 7500 max. THAT is some work left there.
Roster looks like this now, with all Team-Ups at 60, 31 Level 60 Heroes and 2 not yet started. Daredevil wasn’t especially fun while levelling, but I think with some more gear he might be – on bosses. Really horrible at AoE 🙁

This weekend it was Marvel Heroes again for the most part – how surprising.
First of all, the roster got another upgrade: Thor via 175 Eternity Splinters, then Daredevil via Black Friday Sale (325G) and lucked out on Silver Surfer via BOGO from Daredevil. \o/

First Magik got to 60 and I’ve been running some Cosmic Terminals already, then finished Doctor Strange and finally brought Silver Surfer from 1 to 60 today. He’s really fun to play, and my first Movement Hero (if you don’t count Nova…)
Captain Marvel, Hulk, Star-Lord and Thing are the only non-Level 1 Heroes that are missing Power points because they were levelled without Story Mode, so that’s something to do once I’m out of non-maxed Heroes. All the others sit at 166 (or 169 with the Limbo quest done) points.
For how much money I spent.. 16 EUR for 2100G in August and November, 980G left – I can really live with that amount of money.
After the STASH changes, I’m sitting at 8 General tabs and 23 Hero tabs – and still running out of space all the time. Curse you, Gazillion 😛

A quick one this time. A bit of work on Hawkeye, still in the low 40s, but Magneto (from my 300 days of Login bonus) is 60 – quite fun to play once you get over the very squishy first 20-30 levels.
I grabbed Pirate Deadpool from the secret achievements via this guide. It felt like grouping didn’t work, but not 100% sure. 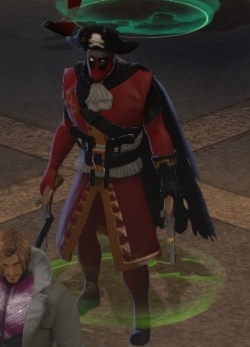 And I bought Magik on presale (first time) in the shop, very excited to get her hopefully this week.

It’s nearly a week later and I’m Level 33 (and a bit) – this is really as hard as people wrote on the forums :P. I played most nights since the last post, but not much every time. I think I’ve spent 8-9h in total. The Omega event has started and we’re at (3*24)% bonus XP today, that means 96% tomorrow and I’ll do Monday Midtown again and hoping to get some levels in.
And I’m also taking advantage of every XP bonus I can get:

Level 33 Hawkeye with 20 INT. Weird. (Displayed Bonus XP of 275% + 185.)
Other than that I levelled Doctor Strange to 47 casually and did a few Achievements (mostly finding the Treasure Rooms in Story Mode) and shuffling some gear around in the Stash by equipping some neglected Level 60 Heroes.

Yep, I did it. Took advantage of Monday Midtown Mayhem and started Cosmic Prestige on Hawkeye. Managed to get to Level 26 (running several XP boosts) in exactly 4 hours.
Finished Story Mode Chapter 1-3 following to this guide as usual (for the rewards, not everything) and the rest was spent in Midtown, always joining the bracket 2 levels too late and leaving it 2 levels too late in order to not fill up on reward chests I can’t open so much (i.e. joining the 15-19 bracket at 17, leaving at 22).
I don’t want to know how long it will take and if my 25h estimation from yesterday for the whole thing is too high or too low, but I’m gonna make it!

Some updates. Spider-Man is Level 60 and a lot of fun. Levelling him was so fast that I decided to try something out as long as the A.R.M.O.R. event is supposed to give +100% XP. So I loaded up on 3 different XP boosts I had in my stash and prestiged Hawkeye twice. From Purple to Orange, from Orange to Red. Each run took about 65 minutes (with 2-3 short visits to a terminal for the A.R.M.O.R. drop buff mission thingy). So I still have nearly 4h left on this +150% to everything buff and 110 minutes on the normal +50%, so I’ll maybe look if I have another 1-2 different ones and go for Cosmic prestige tomorrow in Midtown Madness. We’ll see. Or I’ll level Doctor Strange. An additional benefit of those runs was having 3 Hawkeye Costumes for the blender, which yielded the She-Hulk Lawyer costume, the one I was looking forward to anyway. Now I just need to get She-Hulk as Hero.. as I’ll get my 300th login bonus (Random Hero) in less than 2 weeks I’ll probably save up splinters up till then and after using that one just buy her.

Sometimes being a completionist is fun. Chasing achievements, collecting virtual things, killing all bosses. This week Marvel Heroes had the Mystic Mayhem event (which should close down tonight) where you could do a quest to queue up for a 5man instance (a run takes ~10 minutes and the queue is hardly more than 2-5 minutes) and are rewarded with 3 Power Points (like skill points in other games) and a bit of permanent health (+63, and a typical Level 60 Hero has ~10k).
So yeah, I managed to finish this quest on all my 25 Level 60 Heroes (even on the first try each) and am a bit exhausted now. Probably gonna be happy tomorrow as it’s sometimes a nice little boost (and for some Heroes quite useless).
Still, TOO MANY CHARACTERS for this kind of stuff…

After the downer with RO I got into playing Marvel Heroes again (last post was June 30th, so basically I didn’t play for nearly 4 months).

Now what do we see here?
Rogue, Star-Lord, and Black Panther went from “just started” to 60 (that’s 25 Level 60 Heroes of 27 I own) and there’s 2 new Team-Ups, Wolverine and Shield Agent, for a total of 5.
Spent 2×175 splinters on random Heroes. No luck this time, but there’s a free token waiting for me in ~18 days of login. (Which will be my 300 day anniversary. As I think I started playing around Christmas 2014, that seems to tell me I only didn’t login ~14 days this year. But many of those were literal 1 minute visits for the login bonus.)
I also bought some costumes (first time iirc). “Armored Panther” for Black Panther, “Avengers Movie” for Hawkeye and “House of M” for Scarlet Witch (they were all on a 50% sale and then between 300 and 400G each) and a Hero Tab for Star-Lord.
Also still playing Lost Lands once per day and Fallout Shelter on my phone. But after hitting 110 Vault Dwellers I’m only keen on the Nuka Cola Bottler and then probably leave it.

Yes, I played some more Marvel Heroes again after a little break. It’s probably a bad idea to not be in the mood during the awesome anniversary and with all the buffs, but I logged in daily and on Sunday and Monday I achieved quite a bit.

First I got Squirrel Girl to 60 on the weekend and with the help of Midtown Madness and a few XP boosts Thing from 1 to 60 in one evening without much effort (lacking all the skill points from story mode though) and what can I say… I really enjoyed Squirrel Girl but I loved Thing even more. This was exactly how Hulk should’ve played back when I played him. I definitely need to grab some gear and maybe even prestige him. I heard or read that the Story Mode revamp could be going live in July, so I think I can live without those skill points for now.
Since my last update there actually were a few more things happening. Nova seemed fun at first but was a bit painful and squishy to level, he’s 60 nonetheless. The new heroes in the roster are obviously the above two (bought Thing during BOGO, lucked out on Squirrel Girl token), took Spider-Man as my free anniversay hero (last one of the 600 Splinter ones I was missing) and Rogue… if only I had written this down sooner – but I’m pretty sure I used 175 Splinters just before buying Spider-Man. So lucky there as well, as I was pondering which of the 2 to take.
Also, one new Team-Up, Iron Man Mk II from the anniversary event.
So this brings me to 22 Level 60 Heroes now, 7 non-cosmic prestige runs, 3 Team-Ups, around 5-6 pets I think and more than 25 days /played. Oh well, apparently they do deserve what money I throw in their direction. Oh, and those 1350G I mentioned in May are mostly gone.