So yeah, didn’t play much today but dug a bit deeper on the Addon development front and this is the outcome:

This is how would use the Library in your own addon:

Whereas the Addon has just one SlashCommand, namely /nogacharexport, which opens a window to copy your character data as JSON. The README in the aforementioned GitHub repo has example output. 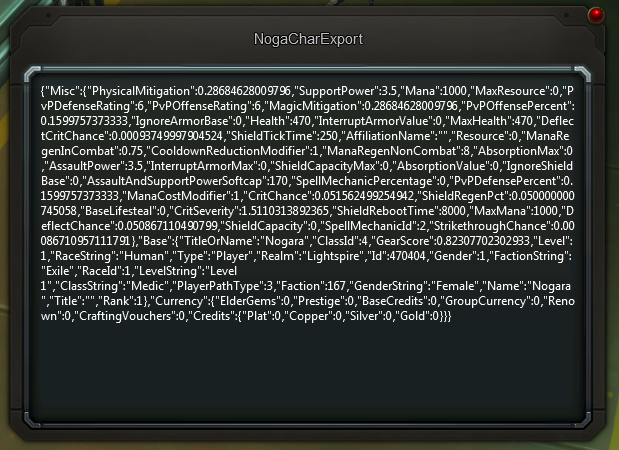 As much as I overall love the experience (reached level 19 and 11), some quests (especially Path quests) can be awfully bugged. Even worse, unlike in other games, a relog did not help so far.
I had one Soldier mission that was only fixed after maintenance and now I am on the Explorer quest “SCAVENGER HUNT: Relics in the Rubble” which never lets the bar fill up to show where to dig, then after doing the 2nd part it does not even let me dig and the mobs that might drop the item in question… won’t. Reading forums again shows several people had that bug and spent hours killing with no result. As a programmer myself I know that bugs happen – but often you can work around them or avoid them, for quests it’s a bit hard, they’re kind of in the middle of a workflow.
Another thing that bugs me are the Mordesh quest givers in early Celestion. I mean, I know WoW is omnipresent, but letting them behave like the Forsaken and even give them the same voices… really disappointing.
On to nicer things, I am using these Addons right now, they all seem to run fine:

I also starting playing around on my own, the WildStar NASA wiki is a good start, but it’s a tad slow (maybe only from Europe) and not very elaborate yet. I signed up and hope to contribute a bit.
Things that are awesome:

Running my daily randoms whenever time permits, DPS/Tank/Healer at 80 and Mage at 79 for Triumph and XP.
So far still happy with all the randoms, apart from a weird tank every now and then or DPS where I do more DPS on my Rogue than the 2 others, it’s fine.
When I installed RankWatch, first out of curiosity how much hits I would get, I thought people might be pissed, until now one person didn’t respond and I’ve already got like 10 “Thank You”, because they seemed to have misplaced stuff on their bars, dinged 80 recently and forgot to train or were lost in dualspec 🙂 Nice addon.
On my tank I’ve jumped the bandwagon and tried Tidy Plates and Threat Plates, quite nice for trigger happy DPS in heroics.
Over and out.

I certainly mentioned I’m an achievement freak, but that’s only an obsession of the last year. I’ve been an addon freak for much longer.
I’ve been putting up a “Recommended AddOns” post on my guild forums nearly every year, so let’s stick to that tradition.
I’ve chosen to file them into one of these categories this time:

Read more after the break.