Paeroka linked to an interesting post of 25 MMOs that came and went since WoW went live and the overlap to what I played or even know a little about is a lot smaller than I expected.

And now the ones I actually played:

PS: Naithin recommended the Yoast SEO WordPress plugin to finally have OpenGraph blurbs and pictures so I’ve been dying to get a new post up for the last few days. Let’s see if this works 😛

PPS: And I just noticed again how long I’ve been following some bloggers, so three cheers for the people who also have kept blogging for 10 years 🙂

In a state of general interest, specific boredom a few days ago and having read Green Armadillo’s posts on the topic I started with Marvel Heroes under the premise that it seems to be close to Diablo in game play and I always liked Diablo-style games.
So first of all, you play as a Marvel hero you might or might not know, there’s no partial character look customization (only paid full costume options afaik) and it’s Free 2 Play with IAPs.
When starting you nowadays get 11 Heroes you can play to level 10, then are allowed to uncap one of those, i.e. be allowed to play them to Level 60, the current level cap.
Right now these starting heroes are: Hawkeye, Black Widow, Storm, Cyclops, Rocket Raccoon, Human Torch, Punisher, Colossus, Black Panther, Luke Cage and Captain America
There’s also a daily login bonus and on your 2nd day you get enough in game currency to buy 1 (or 2, if everything is 50% off for the holidays) additional Heroes. I decided to invest 10$ to get 3 more Heroes, so here’s my lineup now:

Heroes I’d like to have but wasn’t willing to pay money now (and really, 6 characters makes this roughly as many classes as Diablo 3 had, so should be about the same replayability factor, if only for alting/classes): Captain America, Colossus, Deadpool, Iron Man, Nightcrawler, Punisher, Rogue
The other 30 (43 – 6 – 7) didn’t look hugely interesting to me right now, but we’ll see how long I’ll play and if there are more sales offers.
A major drawback seems to be the bank space, which of course can be bought for real money, but as countless MMOs have taught me, stuff you get in the first half of the game is hardly worth keeping around, so I don’t see any problems for now. And unlike the 50% off of Heroes for this holiday sale I’m not pressed to buy that now, I’ll play more than 10h first.
That said, I had a lot of fun in those 10h and it seems to be one of those “play for a quick 30min” games more than a “omg, I spent 5h now” for me, so I’d say I’m happy I gave them a few bucks and think got a good worth in return. I’m usually not that easily pulled in by sales, I only own those Humble Bundles with games I really wanted (although I looked at nearly all of them on time) and I’m not even sure I got any game on Steam this time (besides Hammerwatch, which also plays like Diablo, and is also totally awesome, but it might have been a week before the holiday sale).
Oh, and Marvel Heroes Items Base seems to be very good.

With my WoW subscription gone and no more rested XP on my Medic, I was keen on finally trying out an Engineer. 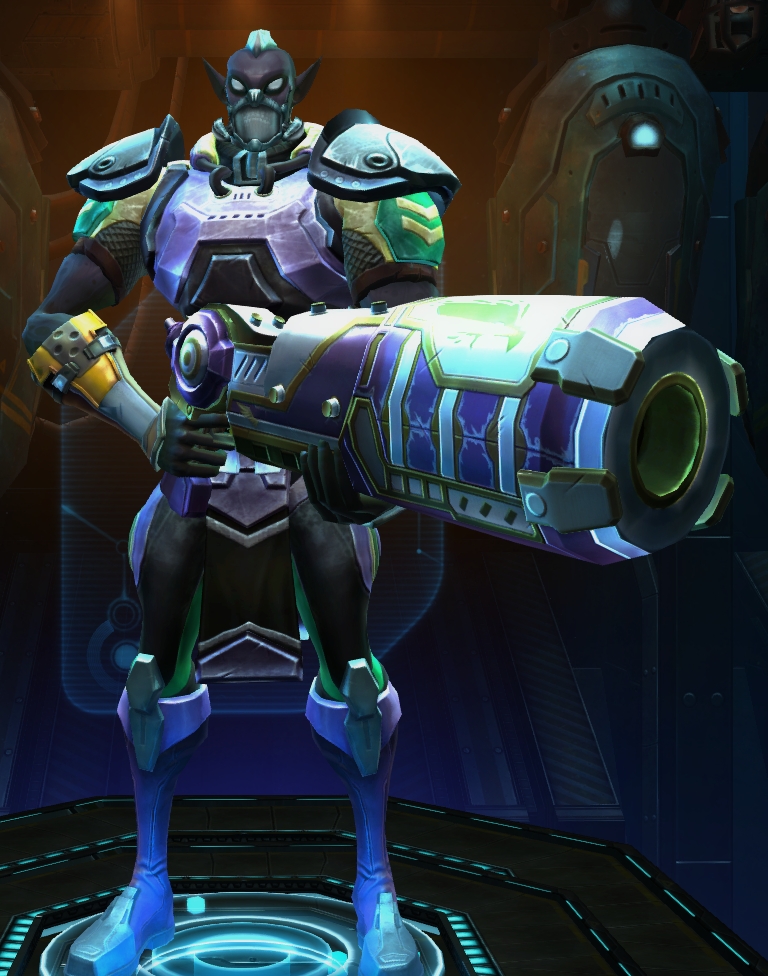 So here he is, again a randomized character as a base that was moderately tweaked. I really love the purple armor.
In other news, I checked all my housing plots and added the “cheap starter edition” of well-rested buffs, which is: